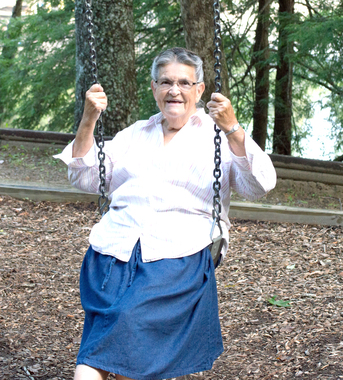 Back to Lula's story

Lula Bell Barnes, age 80, of Monticello, Ky., passed away Sunday, January 12, 2020 at her home.
She was born October 17, 1939 in Frankfort, Ind. the daughter of the late John and Lucille (Palmore) Martin.
She married Paul Barnes on August 25, 1957; celebrating 60 years of marriage prior to his death on February 28, 2018.
She is survived by one son-Paul (Kim) Lewis Barnes, Jr.; two
daughters-Diana Lynn Wilson and Tina Marie Johnson; 18 grandchildren; 28 great-grandchildren.
She is also survived by four brothers-James Martin, Timothy Martin, Michael Martin, and Terry Martin.
She was preceded in death by two sisters-Bertha Smith and Sharon West; and one brother-John Martin.
Funeral services were held Wednesday, January 15, 2020 at 11 a.m. in the funeral home chapel with Bro. Mike Huskins officiating.
Burial was in the Elk Spring Cemetery.
Hicks-Vaughn Funeral Home in charge of the arrangements.
Published on January 21, 2020
To plant a tree in memory of Lula Bell Barnes, please visit Tribute Store.

Plant a tree in memory
of Lula

A place to share condolences and memories.
The guestbook expires on April 20, 2020.