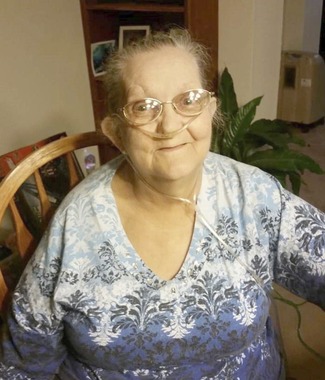 Back to Reba's story

Reba Gregory was born September 17, 1943 and departed this life Monday, November 18, 2019 reaching the age of 76 years.
She was the daughter of the late Albert and Antha (Westmaland) Cooper.
She married Amp Gregory and to this union one child was born.
She is survived by one son-Allen Gregory; four brothers-Aurther, Danny Earl, Paul and Obie Louise Cooper; three sisters-Lucille Davis, Shirley Cooper and Brenda Cooper; three grandchildren-Elizabeth Royalty, Ashley Royalty and Tajuana Hamm; as well as many nieces and nephews; along with a host of family and friends who mourn her passing.
She was preceded in death by her husband-Amp Gregory; four brothers-Odell, Ross, John, and Riley Cooper; three sisters-Marie Brumley, Geneva Hicks and Dolly Davis.
She was a loving mother, sister, relative and friend who will be sadly missed by all who knew her.
Funeral services were held at 1 p.m. Saturday, November 23, 2019 in the funeral home chapel with Bro. James Allen Smith officiating. Burial was in the Davis Chapel Cemetery.
Hickey and Son Funeral Home in charge of arrangements.
Published on December 17, 2019
To plant a tree in memory of Reba Gregory, please visit Tribute Store.

Plant a tree in memory
of Reba

A place to share condolences and memories.
The guestbook expires on March 16, 2020.