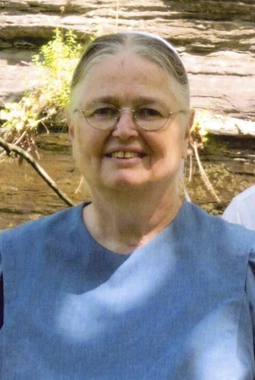 Back to Vesta's story

Vesta Farmwald was born December 27, 1943 to Joseph and Mary (Yoder) Ropp. She peacefully passed from this life on December 11, 2019.
In addition to her husband she is survived by three sisters-Rachel, married to Lester Hochstedler, Perkins, Okla., Mary, married to Chester Miller, Kalona, Iowa, and Clara Troyer, Sugarcreek, Ohio and many nieces and nephews.
On November 27, 1997, she married Ura Miller, who preceded her in death on September 15, 2005.
Surviving from this union there are nine step-children, 26
grandchildren, 72 great-grandchildren.
On May 27, 2001 she married Owen Farmwald, who survives. From this union, she is also survived by 13 step-children, 79 grandchildren and 40 great-grandchildren.
She was preceded in death by her parents; two brothers-Elmer Ropp and Emery Ropp; one sister-Lydia Ropp; one step-daughter, three grandchildren and three great-grandchildren.
Funeral services were held Sunday, December 15, 2019 at 10 a.m. in the funeral home chapel with Bro. Robert Nissley and Bro. Gabriel Beachy officiating.
Burial was in the Pleasant Ridge Church Cemetery.
Hicks-Vaughn Funeral Home in charge of the arrangements.
Published on December 17, 2019
To plant a tree in memory of Vesta Farmwald, please visit Tribute Store.

Plant a tree in memory
of Vesta

A place to share condolences and memories.
The guestbook expires on March 16, 2020.